In this edition we focus on American looms and present them chronologically. Research to restore a mid-19th-century patented hand loom leads to information about two patent holders and manufacturers. We discover the origins of two late 20th-century looms, one simple and one very complex. We end with something completely different.

When Calvin and Diane Huffman visited the American Textile History Museum in Lowell, MA, looking for information about their Mendenhall loom, they knew that it was similar to a Branson hand loom. Diane Fagan Affleck, Director of Interpretation, recounts their adventures in loom restoration and what they learned from their museum visit.

As luck would have it, several historians have studied the men who patented and manufactured these “semiautomatic,” or “self-acting,” looms. When they exchanged information, they discovered quite a number of exciting and unexpected connections.

Victor and Patricia Hilts have done an exhaustive study of the inventor Stephen C. Mendenhall of Richmond, IN, and the looms he patented and manufactured. They show how important his looms were in the historical context of the 1850s and 1860s.

The Branson Family of Ohio

From his comprehensive research into patented knitting machines, Richard Candee was familiar with the Branson family of Ohio and their different business ventures. Studying patent-office records and city directories, he discovered that the Bransons did cross paths with Stephen Mendenhall.

Ruth Anderson was so fascinated by her Dorset Loom that she decided to learn about its origins and designer. With help from the family of the builder,  F. C. Wood, she traces its development and history.

Weaving on a Barbara IV Loom

The Barbara IV loom, designed and patented in 1979 by Thought Products, is very complex. Joanne Mills describes the many features and the challenges they presented to her effort to make her loom functional.

Nahum Ben-Yehuda is a textile scholar who specializes in all aspects of flax and linen. As a rabbi and linguist, he enjoys studying the origins of textile terms. With help from several other scholars, he presents a historical and cross-cultural survey of the basic weaving terms warp and weft. 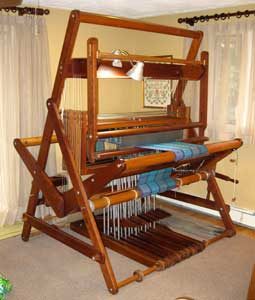