In this edition we learn how Janet Meany, the well-known loom researcher, began her fieldwork. She also describes a loom that is somewhat different from the ones she had studied before. A loom that traveled from Germany to British Columbia is described, and we learn about a frame for making harnesses and heddles. Also the mechanics behind the levers and lamms on looms are explained. We have a tribute to a weaver who was a champion of old barn-frame looms and a review of a book about a handweaver from the first half of the 20th century.

In Search of Old Looms

Janet Meany tells how she began collecting information about old looms in the ethnic communities in northern Minnesota. Her mentor, the late Rora Strum, introduced her to the weavers. Some of the looms she studied had interesting histories.

Janet Meany recounts the history of the resources she offers for studying rag rug weaving and old looms: her book, her newsletter, and the library of loom manuals.

Janet also describes a loom that was found in a museum. For want of a better term, we are calling it an English-style barn-frame loom, but this might not be accurate. It has some unusual features.

A German Loom in British Columbia

Els van Dam tells how she and her husband, Otto, rescued an old German loom from the fireplace. Brought to British Columbia by a German weaver, it was in pieces for many years. They set it up and fixed its unusual automatic take-up system so that it would work. Then they found it a good home.

A Harness and Heddle Maker

Susie Henzie has a strange object in her extensive collection that she knew was a textile tool, but she wasn’t exactly sure what its function was. With the help of a picture in a booklet, she figured out that it is a frame for constructing a harness and making the heddles on it.

Bill Koepp explains the mechanics involved in the lamms and levers on looms. He shows how the way they are tied up can influence how hard or how easy it is to work the treadles.

Gene Valk, who died last year, was a frequent contributor to the Hand Looms Supplements. Marjie Thompson has written a tribute to Gene, reminding us how much she added to our knowledge of these timeless tools.

A new book about Bertha Gray Hayes, a handweaver in the 1930s and 1940s, gives us some insight into the handweaving community of that time. I present a review of this compilation of her designs and notes that was edited and published by members of the Weavers’ Guild of Rhode Island. 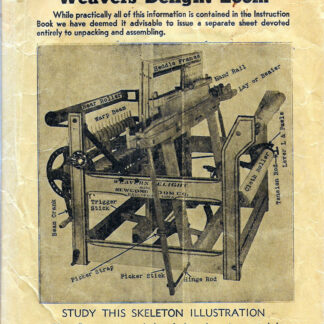