As we begin our 23rd year, we will see the wide spectrum of variations in spinning wheels, from very finely and delicately turned parlor wheels from York, England, to crudely constructed but functional great wheels from Southern California. It is ironic that these wheels were made in the same time period, the 1790s. Also we are introduced to a late 20th-century spinning-wheel maker from Orkney in the British Isles and a couple of other wheels from that region.

Valerie and David Bryant have done extensive research on British spinning-wheel makers, especially those from York in the 1790s. So they were surprised to find a spinning wheel with the characteristics of those made by John Jameson that had a label that said it was built by Joseph Doughty. They offer several possible solutions to this mystery.

Elizabeth Lovick pays tribute to Granville Swanney, the last spinning-wheel maker in Orkney. She describes the man and the special features of the spinning wheels that he made for his unique location.

Having learned about Orkney spinning wheels from a workshop with Elizabeth Lovick, Dorothy Lumb was pleased to acquire one, even though it was incomplete. Some time later her friend Carolyn Platt found one marked WILLIE PETRIE. Dorothy compares the two wheels, highlighting the characteristics found on Orkney wheels.

Susan Hector studied the great wheels used in the missions in Southern California in the Spanish Colonial period [1769 to 1834]. Although none of these wheels remain, she was able to track down reproductions made in the 1930s. She describes these crudely constructed but functional wheels and their place in the history of the missions. 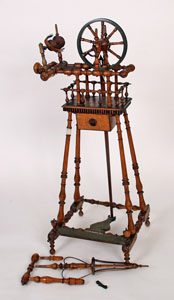