In this edition we will travel through time to learn of looms used through the ages. We begin with the early warp-weighted looms that date to ancient times. When an early 19th-century hand loom is restored, a complicated warp-brake system is discovered. Barrel-type looms for ingrain carpets are also from the early 19th century, but they were part of the technological transition from preindustrial to industrial manufacturing. Looms designed for weaving rag rugs at home were first designed in the 1880s, but the company that made these popular looms continued into the 1970s.

In his many years as a traditional weaver, Norman Kennedy has used many types of looms. He tells of his experiences with warp-weighted looms that were the earliest looms used in many parts of the world.  As part of a grant from the Vermont Arts Council, he taught Bruce Engebretson how to set up and weave on a warp-weighted loom so that he can teach others.

When an early 19th-century wooden loom, probably of French-Canadian origin, was donated to the Carlisle [MA] Historical Society, Nancy Kronenberg and a team of helpers and advisers undertook to get it functioning again. The most challenging aspect was the warp-beam brake system that was unlike most others found on looms of that period.

Ingrain carpets were popular in the first quarter of the 19th century in England and Scotland, and loom makers were attempting to construct looms that made them more efficient. Sandra Rux traces some of these innovations, especially the barrel loom, and tells how they came to America with help from Scottish immigrants.

Theresa Trebon and Janet Meany are cofounders of Historic Looms of America. Theresa introduces Charles N. Newcomb, the inventor and founder of Newcomb Looms, and describes the growth and development of the Newcomb Loom Company of Davenport, IA.

Janet maintains the Loom Manual Library. She excerpts descriptions of Newcomb’s most popular looms from the many catalogs that she has collected. 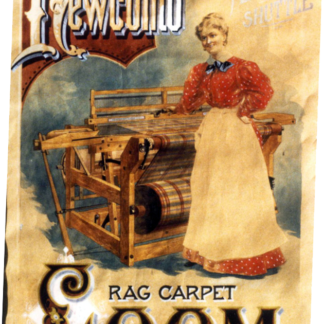