In this issue we look at some of the other tools used by spinners to prepare the fibers to spin or after they have spun the yarn. In England a label on a skein winder may provide the clue to the maker of a matching lady’s parlor wheel. The history of the niddy-noddy or handheld skein winder may go back to the 9th century in Europe. Two lesser-known tools are commonly used to remove the seeds from flax plants at the beginning of the process to extract the long spinnable fibers.

A Lady’s Wheel From Stockton-on-Tees

In the course of their research Valerie and David Bryant found a lovely little upright lady’s parlor wheel. They came across two or three very similar wheels but had no idea who made them. It wasn’t until they found a wheel with a matching clock reel with a label on it, that they were able to solve the mystery.

Most of us take the niddy-noddy or handheld skein winder for granted. But when Mary Knox started researching its history she found that this simple tool might date to the 9th century in Norway. She traced images in European art works to study the styles and experimented with the two different types she found.

Carlton Stickney tells us about ripples and flails. Ripples are used  to remove the seeds from dried flax plants, and a flax flail breaks the seed husks to get out the seeds. He describes two ripples he owns and shows a flail in action. He also shows two signed hackles he owns. One was made by an early 19th-century company in England, and the other has the stencil of Benjamin Pierce of Chesterfield, NH. 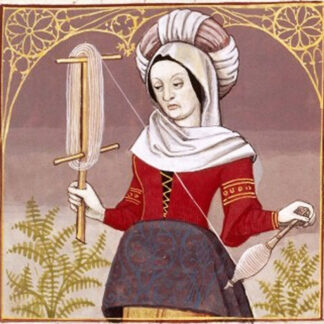