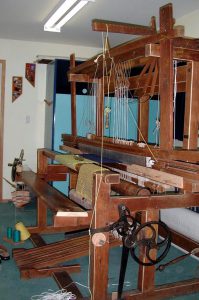 60″ 12-shaft countermarche loom built by Andeas Kohmann in Bamberg, Germany. Side view shows automatic take-up system, a set of three visible, interlocking gears. The gears are mounted on what appears to be a flat metal support that is slightly convex, towards the back of the loom. The metal support is attached to the top and bottom side supports of the loom. The upper of the three gears has a crankshaft attached, which rests on a smooth wooden cog. There is twine attached to the crankshaft that leads to the take-up system via a support beam above the castle. The are eight visible treadles and the release for the warp beam is visible. The loom is set up to use eight of the twelve shafts and treadles.