In this edition we focus on looms from the opposite coasts of North America. We discover a small museum  in southern California that has amassed a large number of looms. We learn about some examples in that collection built by less well-known mid-20th-century loom makers. A weaver in Massachusetts recounts the final stages in her adventures preparing a restored barn-frame loom in an old garrison house for weaving. We find several examples of a loom built in Boston for a short time in the 1930s by a well-known yarn company.

The Weavers’ Barn at the Antique Gas & Steam Engine Museum

The Antique Gas and Steam Engine Museum in Vista, CA, has a Weavers’ Barn that contains more than 50 looms from all periods. Run almost entirely by dedicated volunteers, members of the weavers’ guild keep the looms working. Karen Greeley and Judy Maddox describe the short but exciting history of this fascinating collection.

In the museum collection are examples of handweaving looms built in the mid-20th century by California loom makers who are not well known outside California. Karen Greeley tells the characteristics and some history of the looms built by Burnham, Binder, Walling, and Klentz.

The Loom at the Old Chelmsford Garrison House, Part II

In Part I, in Supplement #17, Penny Lacroix told how she, with help from her husband Dan and others, cleaned and restored the structure of a loom in the Old Garrison House in Chelmsford, MA. Now she tells about designing the cloth, winding the warp, and dressing the loom. She recounts the challenges, the frustrations, and the ultimate success to be able to weave on this loom.

Although best known as a yarn company, for a short period in the 1930s “Emile Bernat & Sons, Jamaica Plain, Mass.” built and sold looms. I have found only four examples of these looms, three of which have interesting histories. Material from the Loom Manual Library answered some of the questions about the looms. However, finding the answers to the questions about the company has proven more difficult in spite of help from many public and private sources. 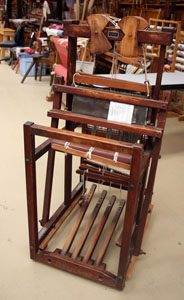