When I started the newsletter in 1993, the only reference I found to a spinning-wheel maker was in a footnote in a scholarly article about early American furniture. Thanks to our many contributors over the years much has been discovered about many of the men who built these tools. With the Internet, now if you find a signed spinning wheel you can often discover more examples of the man’s work and background information about him. But not always. We find many marked examples of works by a man possibly from Connecticut, but who exactly he was is still a question. Likewise, a signed wheel in Scotland might be the work of a man who later built a mill, but it can’t be confirmed. We learn about two metal spinning wheels from Sweden and remember two early contributors.

The Search for J. Platt

Brenda Page’s first spinning wheel was a small flax wheel marked J. PLATT that was handed down in her family from Connecticut. She discovered other structures with his mark: a great wheel, a double-flyer wheel, a reel, and even a bobbin winder. His woodworking style was similar to that of other Connecticut wheel makers from the late 18th and early 19th centuries. But what did the J stand for—was it Josiah, Jonas, or Joseph? Brenda recounts her adventures trying to solve this perplexing mystery.

A wheel marked THOMAS IAMIESON BRECHINE was given as a gift to Valerie and David Bryant. The structure is unusual in that it has two bobbin/flyer units in a horizontal arrangement on the table. Although they were able to learn a little about Jamieson, they are not sure that the man who owned a mill in Brechin, Scotland, was the same man who built this wheel. David explains how he brought the wheel back to working order.

Viewed separately, the metal upright wheels belonging to Krysten Morganti and Cindy Craft appear to be very similar. But when they are placed side by side the differences are obvious. Krysten describes what they found and what they know about these wheels from Sweden.

Sadly, in the last few months we have lost a pair of longtime supporters and contributors: Sue Burns and Grant Betzner. I share remembrances of them and how they helped me and the newsletter. 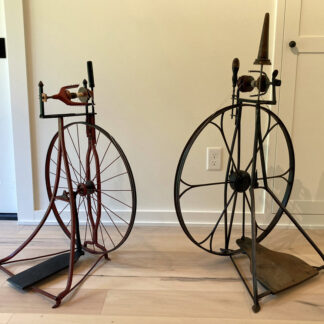