We have come a long way, but our contributors continue to share their excitement about new and different spinning wheels that they discover. In this issue we learn about three very big wheels. One is a bobbin/flyer treadle wheel. The other two are large spindle wheels. Although three wheels appear to have fairly standard structures, each has an unusual bobbin/flyer and tension adjustment configuration. Two are from Norway and one is American.

A Family of Wheels of Unknown Origin

Recently Caroline Foty acquired the spinning wheel that was #94 in the Cummer collection. She describes its distinctive structure and the turning style of its components. An example of a very similar wheel presented in a Ravelry forum brought up images of several more with the same style of turning. Who built these wheels remains a mystery.

Mystery of the “Moon Over Spoon” Great Wheel

Julie Levin and Barbara Livesey bought a great wheel with a curved table that they nicknamed the “Moon Over Spoon” wheel. On close inspection they found that it had many rare features. From studying the construction details and fine workmanship, they explain why they think it dates from the 18th century.

A Great Wheel from the Late Hippy Period

As an archaeologist Susan Hector likes to place objects into the correct cultural and time framework. She tells how when she adopted and restored a homeless great wheel, she found construction features that showed it was built in the late 20th century in the “late hippy period.”

Krysten Morganti has two Norwegian wheels that look, at first, like many other wheels. But the decorated upright wheel has a metal mother-of-all and tilt-tensioning device. The second wheel resembles other wheels with steeply slanted tables, but the mother-of-all rests on a metal sliding plate. She explains how these unusual configurations work. When Tracey Grzegorczyk sent me an e-mail about a wheel she found with a mother-of-all set into a moving block of wood, I decided we needed to share this wheel, since I have never seen this arrangement on a treadle wheel before. 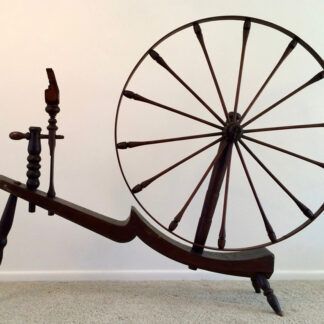