In this edition we have a report on the restoration of two handmade 19th-century looms in Greene County, Ohio. Then we learn about two looms, one simple and one complex, built by a company in Ohio at the beginning of the 20th century. Writing on an old loom leads to an on-line search for its former owner. A 20th-century German loom is restored and updated, and a tape loom on a frame is described.

Kathleen Armstrong was volunteered by her mother to restore two looms belonging to the historical society in Greene County, OH. One had some unusual features, many parts missing, and no history. The other, while structurally simpler, came with all its parts and some history.

Reed Loom Company of Springfield, OH, produced a wide variety of looms from very simple to quite complex in the early 20th century. Windy Ferree tells about her very plain but sturdy “Little Dandy” loom, and Linda Bertanzetti describes her very rare and complex “Superior” loom.

The Mystery of Thomas the Tailor’s Loom

Pencil writing on the side of a large old loom set Julie Fuller on a quest to find the owner, who she discovered was a tailor. Thanks to the on-line resources, she was able to trace him and some of his descendants. She describes the loom and her theories about it.

Frank Dykes obtained his Herald Marquardsen loom by trading some Victorian furniture that he could no longer use. He rescued this loom, which was popular with students of the Bauhaus in the 1930s. He recounts the restoration process and how he is updating the loom.

A Tape Loom on a Frame

From her years of researching and weaving on tape looms, Bonnie Weidert recognized an old and strange-looking piece on eBay as a rigid-heddle loom. She describes the frame construction and how it works. 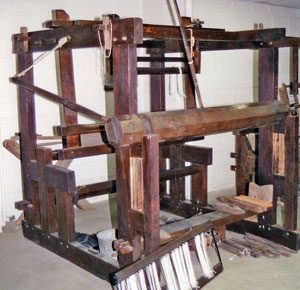