View cart “The Spinning Wheel Sleuth: The First Ten Years” has been added to your cart.

• A Screw-Tension Great Wheel
• The Life and Times of Thomas Wright
• The Columbine Spinning Wheel
• In Memoriam: Carlton Stickney

In this issue a great wheel with a screw-tension mechanism is studied and the steps in its restoration are described. We learn about a Canadian patent holder who designed a moving-spindle wheel but whose later life was difficult. The history of a metal spinning wheel from the 1970s is presented, and we remember a generous contributor.

When Erika Keller was asked by Lisa Caldarelli to restore her great wheel, she was surprised to find it had a screw-tension mechanism. She studied it and similar wheels belonging to Pat Bingham and Tom Blodgett. She describes the steps in its restoration.

The Life and Times of Thomas Wright

Todd Farrell wanted to learn more about Thomas Wright, who obtained a patent for a moving- spindle wheel in 1869. His design is the lever-action type. Using Canadian census records and old newspapers, Todd learned some surprising things about Wright.

Sandra Sendtko’s favorite spinning wheel is the Columbine, especially for demonstrations. She was pleased to discover that the designer and builder, Tom Wertenberger, was alive and well. He was happy to share the history of the wheel until he sold the business in 1995.

Carlton Stickney was a generous supporter and contributor. He passed away unexpectedly at the end of January. I share what I learned about his life and work. 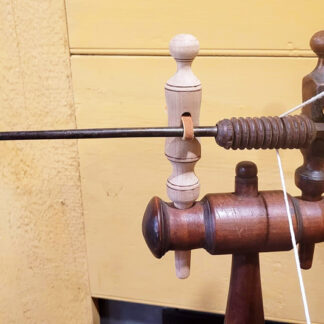