In this issue we learn about the spinning wheels made by a multigenerational family of woodworkers from East Hampton, Long Island, New York. The purpose of mysterious holes on squirrel-cage swifts is explained. We are introduced to a wheel with a three-arm flyer and many decorative features as well as a wheel where the tension-screw system was built on top of the table rather than inside it.

Kathryn Wojciechowski knew from the records of the Dominy family workshop that they produced spinning wheels and other textile tools, but she couldn’t find any. Then a great wheel was donated to a museum that had been in the same local family since it was bought. She realized that she owned a wheel that was a match. She tells us about these Dominy great wheels.

To learn more about the Dominy Family check the following Web sites:

Winterthur Museum, Garden & Library’s page on the book With Hammer in Hand: A story of American Craft.

Charles Hummel’s book With Hammer in Hand: The Dominy Craftsmen of East Hampton, New York has been digitized by the University of Wisconsin.

When Brenda Page studied her large squirrel-cage swift, she discovered some mysterious holes on the bars that hold the cages. She couldn’t figure out their function. Two other spinners have swifts with the same mystery holes. Fortunately, Enrica McMillon had the solution, something she learned from her grandmother.

A Wheel With a Three-Armed Flyer

In 1688 Randle Holme wrote, “The City Wheel, or Gentle Womans Wheel, …. is adorned with many tricks and devises, more to show the Art of the Turner, than to add any goodness to the working of the Wheel.” The wheel that Betty Gijsbertse found is clearly an example of the art of the turner. It has a three-arm flyer and a double-rim drive wheel as well as ornate turnings and other decorative touches. However, in spite of all her experience as a spinner and restorer of wheels, Betty could not get it to spin.

Tension Screw on the Tabletop

Jennifer Malinowski was given a disassembled spinning wheel that had been rescued from a Salvation Army shop. Putting it together she discovered that the drive-wheel section of the wheel was fairly standard, but the bobbin/flyer end had the tension screw mechanism resting on top of the table rather than being built into it. After replacing some parts, she hopes to have it spinning again. 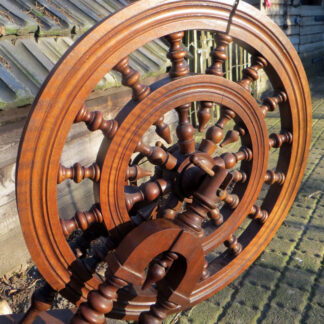