In this issue we discover a spinning-wheel maker active in the first half of the 19th century in Maine whose products were very popular then and remain so today. An unusual variant of a patented tabletop wheel has surfaced and is presented. A one-of-kind wheel constructed from an old table is described, and more information has become available about a 20th-century wheel we discussed in the last issue.

Hannibal Thomson and His “Widely Known and Sought For” Wheels

When Craig Evans asked me about wheels marked THOMSON, I sent him to Jan Cunningham who has three styles of wheels marked H. THOMSON. Craig discovered that Hannibal Thomson was a spinning-wheel maker in Turner, ME, and came from a family of wheel makers. He and Jan discuss the influence of Shaker spinning wheels on Hannibal’s wheels and compare a wheel signed J. THOMSON to those of Hannibal.

Thanks to Betty Gijsbertse, and Tammy Canavan-Soldaat we learn more about the origins and variations of the Moswolt wheels that were discussed in Issue #106.

A Wilson and Fairbanks Oddity

Mike Taylor acquired an unusual tabletop spinning wheel. At first glance it appears to be an example of the wheels patented by Wilson and Fairbanks in the 1860s. But closer examination showed several very important differences.

Edith Ogella shares another of her special one-of-a-kind wheels. This one was constructed by an engineer who specialized in bridge construction. The wheel has many very distinctive features.

To my subscribers, an apology:

The heading for Issue #107 should say January 2020, not October 2020. A replacement page is available. E-mail me for a copy.
Florence Feldman-Wood, Editor/Publisher 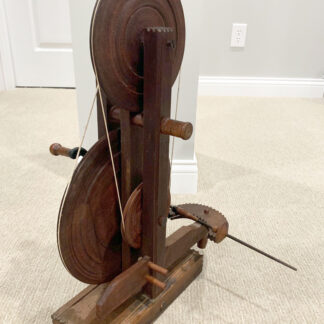